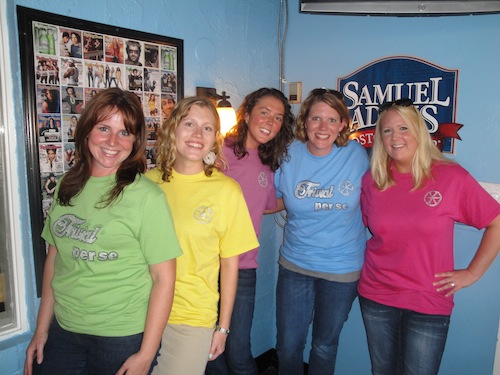 Members of The Law Offices of John Day, P.C. participated on July 20, 2011, as team Trivial Per Se in the first annual Compete for the CURE: Trivia Night 2011, a fundraiser hosted by the Nashville firm of Lewis, King, Krieg & Waldrop along with Corner Pub Midtown to benefit the Cystic Fibrosis Foundation. Team Trivial Per Se placed third among 12 teams after a two-question tie-breaker round. Members of the team included Laura Bishop, Hilari Boggess, and Penny Whitaker of the Law Offices of John Day; Casey Truelove of the The Blair Law Firm; and Liz Sitgreaves, law clerk to the Honorable Frank Clement, Tennessee Court of Appeals. Participants answered questions in categories such as sports, education, science, pop culture, and a special recurring category devoted to the Cystic Fibrosis Foundation.

It was a night of good times and good trivia, but most importantly, Trivial Per Se’s participation helped in the event’s greater purpose to raise money for the Cystic Fibrosis Foundation, a nonprofit donor-supported organization whose mission is to assure the development of the means to help cure and control cystic fibrosis and to improve the quality of life for those with the disease. Cystic fibrosis is an inherited chronic disease impacting the lungs and digestive system that affects about 30,000 children and adults in the United States. When the Cystic Fibrosis Foundation was established in 1955, children with the disease were not expected to live to reach elementary school. Today, many people with CF can expect to live into their 30s, 40s, and beyond. The Law Offices of John Day, P.C. is proud to have participated in such a worthwhile event benefitting a great cause.