Home
FAQ and Legal Guides
What Is a Deposition?

What Is a Deposition? 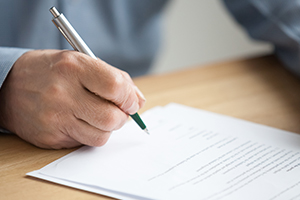 In the simplest terms, a deposition is a question and answer session with the person (referred to as a witness or “deponent”) providing answers under oath.

Here is a more detailed explanation. After a lawsuit is filed, the next phase of the lawsuit process is called “discovery.” During the discovery phase of a lawsuit, lawyers are gathering evidence. As more evidence is gathered, the parties develop a better understanding of the strengths and weakness of their case, which helps either push the case to a dismissal, a settlement or trial. Depositions are a critical part of evidence gathering.

Either party to a lawsuit (either the plaintiff or the defendant) can request a deposition of the other party or witness pursuant to Tennessee Rule of Civil Procedure 30 and 45. For instance, in a car accident case, if the case proceeds long enough without settling, both drivers involved in the wreck will get deposed. Other depositions might include witnesses to the wreck, the investigating police officer, the medical personnel who treated the injury victim, etc.

On the day of the deposition, use you should dress appropriately. We generally tell our clients to dress as if they were going to court or church. Refrain from t-shirts, ballcaps, etc. Be sure to arrive on time, if not a little early, for the deposition. Most depositions take place in a lawyer’s conference room, although they can be held at other locations if convenience dictates it. The witness and the lawyers will sit at a table and a person called a “court reporter” will swear the witness in. In other words, the witness will swear or affirm to tell the truth during the deposition under penalty of perjury, just as if the witness was testifying in court. The court reporter or stenographer will record every word that is said on the record during the deposition by the witness and the lawyers. If a videographer is present, he or she will also video the proceedings and that video may be played to the judge or jury later in the case.

In closing, while depositions can understandably cause some stress, most lawyers try to minimize the inconvenience and will reschedule them (if it is necessary and deadlines permit) and will treat witnesses with civility and respect. Good lawyers prepare their clients for depositions.