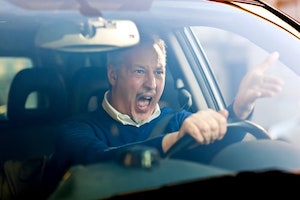 Road rage is a leading cause of accidents, and it is defined as angry or aggressive behavior by a driver. Road rage can include verbal insults, obscene gestures, physical threats, or dangerous driving directed at pedestrians, bicyclists or other drivers. And more recently, there has been a substantial uptick in the number of road rage incidences involving a gun or firearm.  In the last five years, the number of instances in which a gun was brandished or fired at another vehicle has almost doubled.

Most drivers have either seen or been the victim of road rage whether it be a driver who is tailgating, brake-checking, changing lanes wildly, honking, flipping off other drivers and otherwise driving aggressively. Unfortunately, as traffic congestion in Middle Tennessee continues to get worse, so does the bad behavior of many drivers. But, Middle Tennessee is not alone, road rage incidents are on the rise according to the National Highway Traffic Safety Administration – road rage incidents have increased nearly 500% in the last 10 years.

Who Engages in Road Rage?

Everyone is capable of road rage, and researchers have found some common factors amongst those who have engaged in road rage:

Whatever the cause, there are things you can do to calm down. Play relaxing music, remind yourself that other drivers are humans who make mistakes, take some deep breaths, count or recite the ABCs backwards, pull over and get out of the car for a few minutes and remind yourself of the possible repercussions from road rage. If you find yourself the victim of road rage, be the bigger person. Mouth an apology to the other driver or wave sheepishly. If the other driver continues to act aggressively, pull over and get away from them. If the situation continues to escalate, call the police. And of course, if you have a dash cam or a passenger with a phone, video tape the other driver’s aggressive conduct.

Most car accidents are caused by ordinary negligence. For example, a driver is not paying attention and rear-ends the vehicle in front of them or a driver does not see a stop sign and pulls in front of a vehicle causing a wreck. In those situations, the at-fault driver is guilty of ordinary negligence and will be responsible for compensatory damages. In a road rage accident, the law may determine the at-fault driver is guilty of reckless conduct or intentional conduct. In other words, the at-fault driver did not simply make a mistake that caused an accident but instead the at-fault driver engaged in conduct that he or she knew or should have known could cause harm. For example, in a fit of road rage, an at-fault driver runs a bicyclist off the roadway or fires a gun at another vehicle, the at-fault driver knew or should have known that someone could get hurt. If that driver does hurt someone and the law finds he or she acted recklessly or intentionally (as opposed to negligently), then the driver could be responsible for compensatory damages and punitive damages.

If you have been the victim of a road rage incident in which you or a family member were injured, one of our award-winning lawyers may be able to help. We offer a free, no-obligation consultation and we only get paid if we recover money for you because we handle all car accident cases on a contingency basis. To get started, simply give us a call at

Of if you prefer, we will call you if you fill out this form with your contact information. If you are considering legal action, do not delay. The law only allows you a limited period of time to pursue your legal rights.