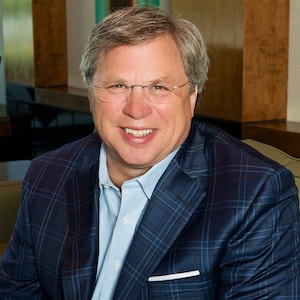 John Day is the founder and owner and of The Law Offices of John Day, P.C.; he has been practicing personal injury and wrongful death law for more than 30 years. He also handles select commercial litigation matters.

John grew up in a small community in central Wisconsin where his father practiced law. From an early age, John’s parents instilled in him the value of hard work and education. His father would occasionally take John out of school so that he could watch his father in court. Whether his father was defending someone against a criminal charge or helping someone with a family law matter, John witnessed first-hand his father helping people through some of the most difficult times in their lives. The experience had a profound impact on John, and ultimately, he chose a career in law.

John worked many different jobs to pay his own way through college including mowing yards, shoveling snow, delivering newspapers, bagging groceries and helping a college professor start a title insurance agency. He also worked as a grocery store checker, a meat cutter, a bartender, a manager of a college bar and restaurant, a loading dock worker and a developer’s representative on a construction site, He worked full-time his last two years of undergraduate school at the University of Wisconsin-Platteville.

John went to law school at the University of North Carolina at Chapel Hill, where he was a member of the North Carolina Law Review and was elected to the Order of the Coif. He initially envisioned himself returning to his hometown to practice law, but fell in love with the people, the food and, of course, the climate of the South.

After graduating with honors from law school, John accepted a position with a large firm in Nashville where he found his mentor, the late John T. Conners, Jr., an injury lawyer. John found helping injury victims deeply rewarding, and eventually opened his own firm dedicated to helping people who were harmed by the carelessness of others.

John is an active author and speaker. He has written four books (one with two co-authors) and has published over fifty articles in peer review journals. He has also given over 300 continuing legal speeches across the United States.

John lives in Williamson County, Tennessee and has three children, two of whom have graduated from college and are in the workforce (in Minneapolis and Atlanta, respectively) and one who starts ninth grade in the Fall of 2021. John is married to Joy Burns Day, a fantastic cook and mother who also happens to be an excellent trial lawyer. The family has a cabin on Tims Ford Lake near Lynchburg, Tennessee, and at sunrise on virtually every weekend morning in warm weather, John can be found on a Sea Doo exploring the lake's 220-mile shoreline.

Articles for "Day on Torts" Column

Client Reviews
★★★★★
Everything was great. You guys are a great representative. I was satisfied with everything. Truly appreciate John Day and his hard-working staff. Jamar Gibson
★★★★★
We thought that you did an excellent job in representing us in our lawsuit. We would recommend you to anyone. Mitch Deese
★★★★★
The Law Offices of John Day, P.C. is, without a doubt, the best in Nashville! They treated me with the utmost respect and tended to my every need. No question went unanswered. I was always kept informed of every step in the process. I received phenomenal results; I couldn't ask for more. I would definitely hire The Law Offices of John Day, P.C. again. Anthony Santiago
★★★★★
I would definitely recommend to anyone to hire John Day's law firm because everyone was helpful, made everything clear and got the job done. I am satisfied with how my case was handled. June Keomahavong
★★★★★
It's been a long battle but this firm has been very efficient and has done a remarkable job for me! I highly recommend them to anyone needing legal assistance. Everyone has always been very kind and kept me informed of all actions promptly. Linda Bush
★★★★★
I had a great experience with the Law Offices of John Day. The staff was very accommodating, and my phone calls/emails were always responded to in a timely manner. They made the entire process very easy and stress-free for me, and I had confidence that my case was in good hands. I am very happy with the results, and I highly recommend! Casey Hutchinson
View More
Submit a Law Firm Client Review