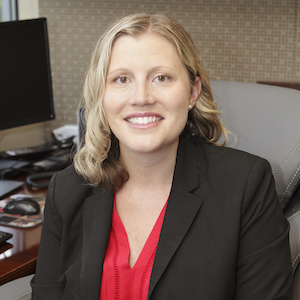 Liz previously served as a Senior Judicial Law Clerk to the Honorable Frank Clement of the Tennessee Court of Appeals before transitioning to private practice.

Liz has been recognized as an Attorney for Justice Award by the Tennessee Supreme Court continually from 2015 - 2020 for her dedication to pro bono service and service to the bar.

From 2015-2018, Liz was recognized as a Rising Star by Mid-South Super Lawyer and in 2020 was named by Best Lawyers in America as a top attorney in Personal Injury Litigation for Personal Injury and Products Liability in 2020. She has also been recognized by the Nashville Business Journal as one of the “Best of the Bar” in 2017, 2020, and 2021.

A past president of the Lawyers’ Association for Women (LAW), she was the first recipient of its Rising Star Award in 2015. During her Presidency, she established an ongoing Lean-In Circles program that continues today to provide networking and mentoring opportunities to LAW members. She currently serves as Co-Chair of the 2021 Marion Griffin Women’s Symposium. Liz also spearheaded LAW’s Coalition for Fair Courts, which provided voter education and outreach during the retention elections of Tennessee’s appellate court judges.

She is a Barrister of the Harry Phillips American Inns of Court and served on the Executive Committee for the Inn from 2019-2021.

Liz has long been dedicated to public service and has been designated an “Attorney for Justice” by the Tennessee Supreme Court in recognition of her pro bono service in 2015 and 2016. She has also been involved with the Big Brothers Big Sisters of Middle Tennessee for many years. Liz is a Big Sister, and organizes teams to raise funds for the organization as part of the Lawyers for Littles Bowling Events. Liz co-chaired the 2015 and 2016 Lawyers for Littles event, which collectively raised over $35,000 for Big Brothers Big Sisters of Middle Tennessee.

Education
Publications and Speeches
Publications
Speeches
Bar Service
Awards
Community Involvement
Practice Areas
Contact Us
Client Reviews
★★★★★
Everything was great. You guys are a great representative. I was satisfied with everything. Truly appreciate John Day and his hard-working staff. Jamar Gibson
★★★★★
We thought that you did an excellent job in representing us in our lawsuit. We would recommend you to anyone. Mitch Deese
★★★★★
The Law Offices of John Day, P.C. is, without a doubt, the best in Nashville! They treated me with the utmost respect and tended to my every need. No question went unanswered. I was always kept informed of every step in the process. I received phenomenal results; I couldn't ask for more. I would definitely hire The Law Offices of John Day, P.C. again. Anthony Santiago
★★★★★
I would definitely recommend to anyone to hire John Day's law firm because everyone was helpful, made everything clear and got the job done. I am satisfied with how my case was handled. June Keomahavong
★★★★★
It's been a long battle but this firm has been very efficient and has done a remarkable job for me! I highly recommend them to anyone needing legal assistance. Everyone has always been very kind and kept me informed of all actions promptly. Linda Bush
★★★★★
I had a great experience with the Law Offices of John Day. The staff was very accommodating, and my phone calls/emails were always responded to in a timely manner. They made the entire process very easy and stress-free for me, and I had confidence that my case was in good hands. I am very happy with the results, and I highly recommend! Casey Hutchinson
View More
Submit a Law Firm Client Review