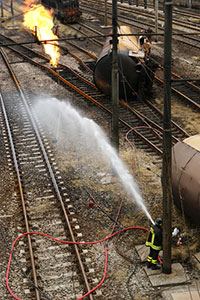 In 2012, the Federal Railway Administration recorded 1,283 train derailments and 154 train collisions nationwide. In 25 of those incidences, a hazardous material was released requiring a total of 2,116 people to be evacuated. Sometimes these accidents only cause property damage. Other times, these types of train accidents are deadly.

If you or a loved one has been injured in a train derailment-chemical spill type of accident, one of our experienced lawyers can help you recover the compensatory damages and, if appropriate, the punitive damages you deserve. We know you have a choice in lawyers so we urge you to review our awards, results and client testimonials and then give us a call anytime at 615-742-4880 or toll-free at 866.812.8787 for a free consultation. Or you can fill out this form and we will call you. We handle all train accident cases on a contingency basis so we only get paid if we recover money for you.